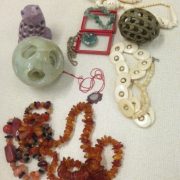 Gill Illustrated her talk with slides and souvenirs from her holidays. Amber is a fossilised tree resin that is easy cut by hand or with a flexible shaft tool.  Usually a rich yellow but can be red or blue.  If it happens to have an insect trapped in it, then the value rockets.  We were shown some photographs of the amber rooms in St Petersburg where whole rooms are covered in carved amber.   Warning – There is fake amber on the market.

Jet  is fossilised Monkey Puzzle tree, rather like coal.  It has been used for jewellery since Roman times, became very popular in Queen Victoria’s reign, and has come back into fashion through the Goth movement.   It is illegal to mine it, but it can be picked up (if you are very lucky) from the beach after storms.   It is soft but brittle and takes a high shine.

Jade comes in various colours green, lavender, red, yellow, white and black.  It is very hard and can only be shaped with abrasives.   It has been carved in China from the Neolithic Period (c. 3000-2000 b.c.e) onward.   In early times the abrasive used was sand which can be worked into the jade with a wood or copper tool, now diamond tipped tools are used. ? We were shown a carved ball with more balls inside, and Nick Pantildes explained how this was done . Ivory from elephants is now a restricted material, so most examples date from before the laws about sale of ivory were enacted.   Ivory can also be obtained from  walrus, and mammoths.  There is also false ivory which is a resin based material.  One interesting fact was that elephants are evolving, and tusks are getting smaller because the gene pool for the larger tusked elephants has been reduced by poaching.