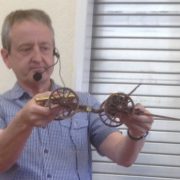 David Kershaw has always loved makings and uses wood, brass, plastic and electronics in his work. ? There seems to be various levels of accomplishment in the model making world.  From bought plastic kits ready to be painted, through models made from scratch ( all the parts made by hand), to museum standard models that are too good to be played with in case they got damaged.  David placed himself in the middle of the range, making some things from scratch, buying in other peoples failures from E Bay, but not achieving museum standard of finish.

The Gun Carriage was made from scratch.   He had made a jig to ensure that all the wheels were the same size, and that the axel was in the middle. A brass tire was added to hide the method of manufacture.   To a chainsaw carver this seems very fiddly work, but he manages all his work on a small table, whereas my workshop extends the whole of the basement and is still crowded.

David showed us two boats.  The Fire boat was an E Bay wreck which needed to be stripped of paint, have certain repairs , and some parts made from scratch.  The other boat he is making to plans and he described the problems of this sort of work.  It is so easy to get the keel out of line, as the glued on pieces may exert strong forces pulling the whole boat slightly out of shape.  He will sail these boats in Heywood with the Mutual Model Boat Society from 9.30 to 12 on Sundays.  He says he prefers boats to airplanes as planes crash more frequently .    A trick of the trade? ?He used a curtain ring as a life?Lifebuoy!! David has a web site that shows the process of building a boat www.perkasa.co.uk The gun carriage was built from scratch.  A kit would have cost  30, would not have a solid brass cannon, and would not have been half as much fun to make. 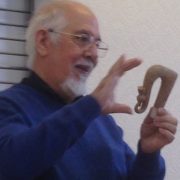 Three members showed us the way that they have made walking sticks.   These were sticks meant to be used rather than show pieces made to the exacting standards of the British Stickmakers?Guild.    Nick showed us the proper way of making stick!!   A potential stick should be collected in Jan or Feb, allowed to dry out bit so that shrinkage has happened, straightened whilst there is still some moisture in the stick, and a handle attached.   There are lots of designs for stick handles in magazines, but do check that the illustrated handle is the right size for your stick.  The stick can be made from such odd things as Brussels sprouts  stems and bamboo.    The joint of the handle to the stick needs to be strong.   Nick recommended a quarter inch hole in handle and stick, and a threaded bar.   Adrian Carter suggested using a washer that fits the diameter of the stick, to help find the centre of the stick when drilling.  Make sure that the handle meets the stick without a gap, and that they meet smoothly.   Use Araldite glue or similar, only glue rod into the handle first, and protect the outer surface from excess glue with some masking tape.  Drill a small hole at the bottom of the hole that will hold the threaded bar in the stick, to allow the excess glue to escape.  The stick needs a ferrule of some sort and can be finished with whatever you have. John Adamson showed us another way, he collects his sticks ready made from the hedgerow, and uses them without any straightening.   It is just a matter of being there at the right time ( a minute before the other chap), and having your eye in for sticks.  It helps to go somewhere that is likely to have plenty of sticks.  His favourite place is besides a railway line where some ash trees were clear felled some years ago.   For a ferrule he uses shot gun cartridges.  If he finds a wonderful stick handle that needs a stick, he fixes it on to a commercially available metal walking pole.  These have the advantage that they can be collapsed down and fit into a suitcase. Stewart Hood showed us some of his wonderfully carved walking poles. May be a bit too heavy for actual use but a good talking point