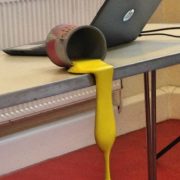 Four of our newish members were very brave and told us how they came to join the club and how they were progressing with their carving experience.    They were all quite different from each other.   Nico Pantelides gives new members and introduction to carving, explaining the use and sharpening of tools, and setting fairly standard “first carving” projects.  I was expecting that our speakers would all be at roughly the same stage, but NO.

Brian Grove had a walking stick that needed shortening, so he asked around.  He was put in touch with a club member and saw his work, got interested and joined us.   He has now gone into industrial type of production of carved hedgehogs for his grandchildren.  His next project is a howling wolf .  He stressed the helpfulness and friendliness of the club members.  They are always willing to chat and offer advice Glynnis Cruice discovered the club at Towneley Hall in 2011.   She had to be convinced that women carved but was assured they did.  A couple of years latter, when she retired, she joined and has tackled some ambitious work.   Her next project is a chess set.  I have

started to carve a set several times and have always been disillusioned by the number of pawns.  I wish her luck.  She appreciates the members help and friendliness. Martin Haigh is self taught and came to carving as an extension of his marquetry work and is working towards a collage using a marquetry background with carvings of animals in front.  He has stuck veneer to the back of some of his carvings to increase their sturdiness and prevent them breaking along the short grain. Mike Illsley trained as an architect and has brought those skills to the designing of carvings.  His first work was a rocking horse, unusually he did not use a kit or published design, but worked with the wood he had.    He played around with the idea of spilt paint and other stuff.    Has made lots of sardine coming out of a tin sculptures, and has progressed to carving a very realistic bison.   His next project is wooden neck tie, and shirt.