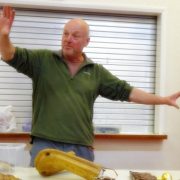 Bob is a new member and told us about his first adventures in carving.   One day, he had amazing luck, and found an advert in a carving magazine for a Furniture Making school that was only yards away from his front door.  There he could make what he wanted with the guidance of Peter Shepherd, use professional tools and just soak up information.  His first piece was a pie crust table. The top was made out of a solid wood, i.e. the crust was not carved separately and added to the table top.   The detail especially round the central column and the legs and feet is impressive.   He took 12 months to complete the work, time well spent in creating an impressive job, and in learning everything he could Under the guidance of Peter Shepherd, Bob made a long case clock.   More fine furniture making than carving with lots of fruit wood and laburnum veneers.   The curly edges of the clock face were first turned to be narrower at the top and then carved into the twisted format, Unfortunately Peter Shepherd left the country and Bob was left to his own devices, but he soon met up with a local group of artists and experimented with all sorts of materials. This is an array of experiments that may one day be made in a bigger and better form.   The heads are plasticine.   The bird skull is real, and there is a version in wood.   The two bits of wood and plywood, were made using the drawing and plasticine model. The jaguar head is a traditionally made sculpture, starting with a clay or plasticine master, a flexible mould, and cast in cement mixed with SBR ( SBR is more formally known as Styrene Butadiene Rubber. … When added to a standard mortar or concrete mix, SBR significantly enhances its adhesive strength ). This gull has a wire armature with a builders expanded foam body, which has been shaped and coloured.