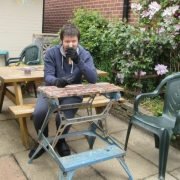 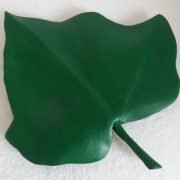 I finished the carving and intended leaving it unpainted, but I had not realised that the undulations of leaf caused the danish oil to soak into the dips and it turned out patchy with almost black patches.  It looked like a withered autumn leaf.  I soaked it in white spirit and sanded it then decided to paint it green with acrylic paint and to give it a sheen I coated with beeswax, which gave it a better result. 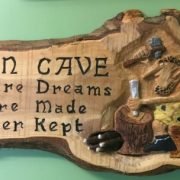 Stuart Hood kindly sent in pictures of two carvings he has done during the lockdown.

He had been toying with the idea for a sign to go on my workshop door and came up with this.  There was a knot hole in the piece of wood, it’s yew by the way, so after wondering whether to fill it in or not, he came up with the idea to fill it with beer bottles. After putting on dainish oil it looked a bit dull so decided to paint it. It’s the first time he had  ever painted a carving.

Stuart wrote that he was not sure what the wood is, he picked it up from Hollingworth lake at a woodland weekend when they were planking some logs. he saw this carving in a book at the club some time ago, and seeing as hisy surname is Hood and is a direct descendent, he thought he would have a go. I have asked if he is related to the Last of the Summer Wine character, Billy Hardcastle, who also claimed to be a direct descendant of Robin Hood. I have not got a reply, but do not expect much of a revelation as both Robin Hood and Billy Hardcastle are fictional, or so I am lead to believe

Some members managed to work their way through the technology and join in a Zoom meeting on Monday 4th May. Some did better than others. I am the one who just could not get my Apple Mac to recognise the camera. What I need is one of those know it all grandchildren. 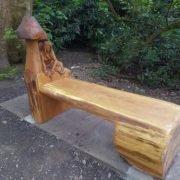 Richard Colbran, one of our members sent some pictures of woodcarvings that have just arrived in Towneley Park, Burnley.

He wrote via email

“ Here are pictures of new carvings in Towneley Park, done by a chap called Richard Goodwin.  I haven’t seen them yet but the pictures look pretty good, and  we shall see how the ground level one’s fare over time! The guy called to see me a few months ago and we had a good morning talking about this and that.

A day or so later

Yesterday morning, we parked at Towneley top gate (opposite Towneleyside), and walked down to the Hall, then along the Small Lime Walk, round Thanet Lea and back up to the car. It was a tough walk for us, especially back up the hill to the Park gate, but well worth the effort.

The carvings have been done by Rick Goodwin on a grant from Pennine Prospects, at Hebden Bridge

The head is in memory of old Mr Barwise, who ran the dahlia nursery at Boggart Bridge.- Now the car-park/play area We haven’t see this one yet.

He lived somewhere near the Royal Butterfly pub on Hufling Lane and used to walk up to his nursery every day, carrying a little case (probably his butty-box!)

He was a regular at St Stephens and I knew him quite well. He was a kindly man, and the first wood-carver to enter my life. I remember him inviting me into his little workshop hut and showing me his work on a lectern for the church, made from laburnum. I suppose I would have been .in my early teens at that time.

The two musical carvings, a violin and a treble clef, in oak, are related to the old Stocks Massey Open Air Music Pavilion, which was on the end of the pitch and putt course, and destroyed by fire in the mid 1960s.  I remember Sunday concerts being held there quite regularly..

There are three more carvings in Thanet Lea, near the Monks Well.

It is nice to know that someone else is carrying the baton, as my carving activities become less adventurous!