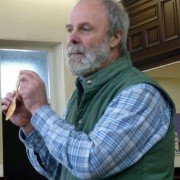 Barry is a minimalist.

All his work is carried out on this bench.   It breaks down into 3 legs and a top for transport.   The metal bar bent like a shepherds crook is a very effective clamp to hold wood on the bench top. He does have more tools than shown here, but not more than wood fit into one medium size work box.

With this minimum he showed us how to carve various types of spoons.   Apparently traditional spoons differ from country to country. ? It was suggested that the differing diets may have caused the difference in design

Here Barry is roughing out a spoon. and the blur in picture is due to the speed that the axe head was moving.

Barry with an British spoon.  The final shape is created with very sharp knives.    He spends more time than I do to achieve a higher degree of sharpness.     It involves rubbing the knife with reducing grits of wet and dry and a final buff on a strop. 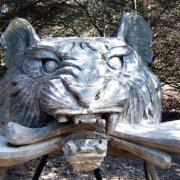 Thompson Dagnall carves wonderfully in wood and stone, usually on a big scale. He showed us pictures of some of his public art commissions. Just put Thomson Dagnall into a search engine and be prepared to be amazed.

This carving is typical of Thompson’s figure work, so life like and with so much vigour and movement.

As Thompson uses green timber there is a high possibility of it splitting. Here he is showing us his solution to the problem; lots of holes bored into the base. If one bid hole had been made it was likely that there would not be enough strength in the wood to resist the power of the shrinkage.

The following pictures have been supplied by Richard Colbran 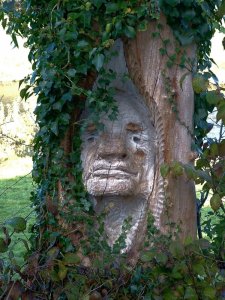 The first two are from , Brungerley Park Clitheroe where he was resident artist for one summer in 1993. 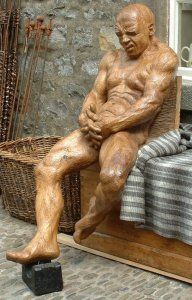 Outside a village shop in Slaidburn 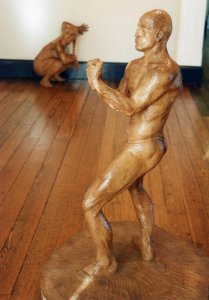 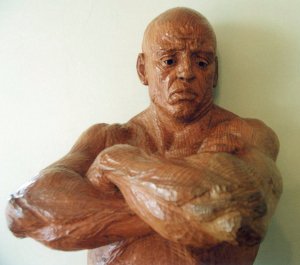 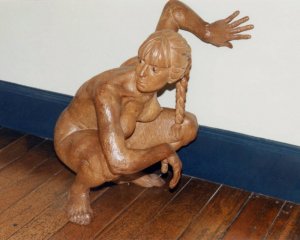 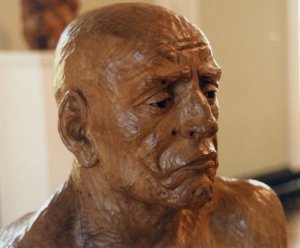 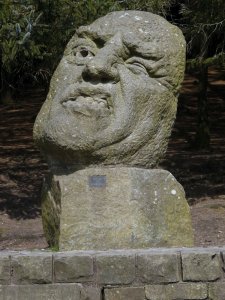 Beacon Fell Country Park, near Chipping – Orme’s Eye, because if you stand at the back and look through the eye on a clear day, you can see Great Orme, near Llandudno. 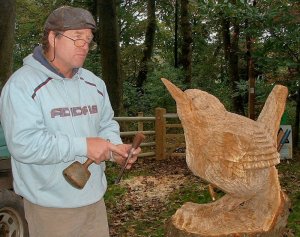 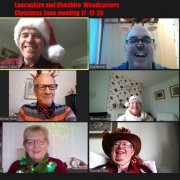 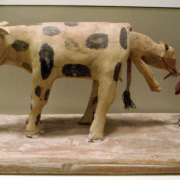 During the time of the Pharaohs reigned in Egypt, 2500BC to 30BC, the materials from which tools could be made changed from stone, through copper, to bronze, and finally iron.  The usability of tools improved with the sustainability of a sharp edge.    However, the introduction of new metals did not necessarily mean the abandonment of older materials that were effective. Egyptians continued using copper chisels, flint scrapers, and in embalming work, exclusively stone blades. Available woodworking tool included:- axe, adze, chisel, bow drill, mallet awl, pull saw, vice, lathe, rule, set square, file, glue, and scraper.   It did not contain a plane and a stone was used to smooth the wood surface.   The earliest example of a plane is found at Pompeii and at other Roman sites.  The earliest gouge I can trace is also Roman.  The adze and the axe would seem to be the most useful tools for general shaping

The Egyptians used a variety of wood. The wood came from native acacias, local sycamore, and tamarisk trees. However, when deforestation occurred in the Nile Valley in about the Second Dynasty, they began importing cedar, aleppo pine, boxwood, and oak from various parts of the Middle East and ebony from Egyptian colonies.   The dryness of the Egyptian tombs provided almost perfect preservation of wooden objects, sculptures, and furniture.  Woodcarving presumably progressed in line with the sustainable sharpness of the tools.

Many ancient Egyptian drawings going back to 2000 B.C. depict wood furnishings such as beds, chairs, stools, tables, beds, and chests. There’s also physical evidence of these wooden objects, as many were found well-preserved in tombs due to the country’s dry climate. Even some sarcophagi (coffins) found in the tombs were crafted from wood. 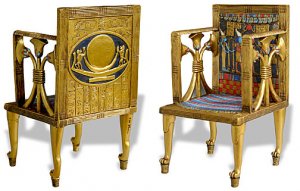 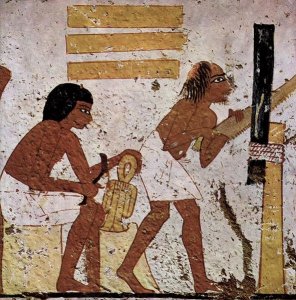 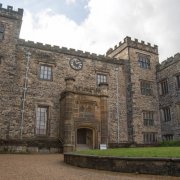 Back in August 2014, some 20 members and wives enjoyed a wonderful guided trip round Towneley Hall and Off Shoots Hall see http://burnley.co.uk/visit/culture/towneley-hall/ followed by a visit to the Off Shoots.

Our guide round the hall took us into parts that normal visitors do not see and allowed us beyond the rope barriers.  The most entrancing object was this reredos attributed to an Antwerp sculptor of 1510-20.

We looked particularly at the bottom middle part “Taking down the cross”.   Being closer than normal and having a strong light shone on it we could (we think) see how it was carved. There are layers of carvings that had been carved separately and then joined to make the whole piece.  I had often suspected this but never been able to see the proof.

After lunch we visited Off Shoots, a Permaculture experiment of some 17 years standing.    We soon drifted to the bodger Brian see www.tribalfurniture.co.uk who gave us a demonstration of pole lathe turning.