Only 7 members made it back to the first Saturday meeting for ages, but they brought an amazing variety of work.     If you did not manage to come on the day and would like to see the work and probably more, make a note in your diary to come to the Christmas party when all will be on show. 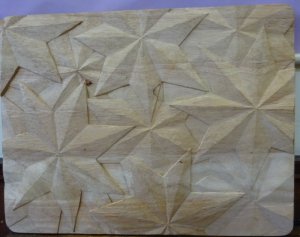 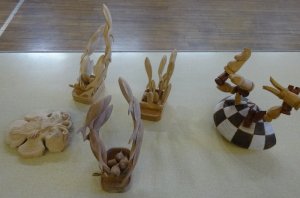 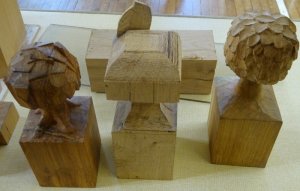 Some rejects from a clients commission to carve 40 Tree Sculptures 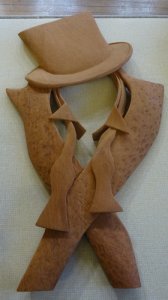 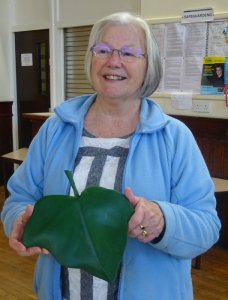 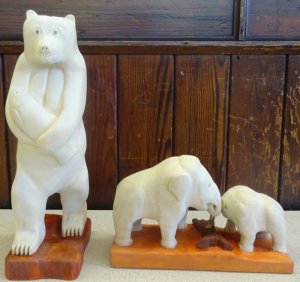 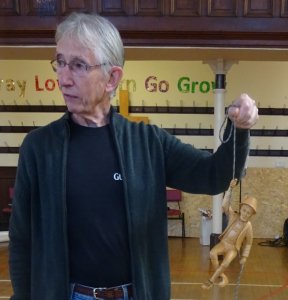 Stuart Hood and an Alpine climber 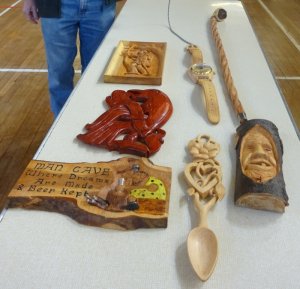 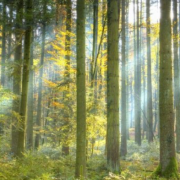 Have you ever wondered about all the different types of trees, their heights, shapes, wood, and shape and colour of their leaves .   NO?   Neither had I.   My current breakfast time reading is  “In Our Time”: A companion to the Radio 4 series by Melvyn Bragg.    It is a transcript of the BBC Radio 4 program of the same name.  There were 4 programs, therefore chapters, on Darwin’s theory of evolution.   This started me thinking and Googling about the evolution of trees.

The very first plants on land were tiny. This was about 470 million years ago. Then around 350 million years ago, many different kinds of small plants started evolving into trees. The world’s first trees, cladoxylopsids, at up to 12 meters tall, these spindly species were topped by a clump of erect branches vaguely resembling modern palm trees and lived a whopping 393 million to 372 million years ago. 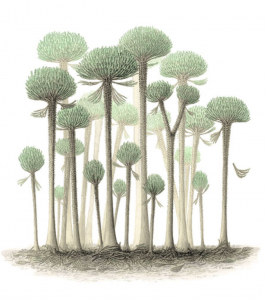 An artist’s impression of a stand of cladoxylopsida trees, which formed Earth’s first forests, from the Science Mag.

The trees are particularly important, because they formed the first forests and as now played a key role in absorbing carbon dioxide and adding oxygen to the atmosphere, affecting the climate and influencing conditions that fostered the emergence of other life forms.   The cladoxylopsids reproduced by spores, which need moisture to enable sperms to move to the egg, so they could only survive in marsh like conditions.

About 360 million years ago seeds were developed.   This enabled plants to colonize non-wet land, and form soil that that slows down erosion. The first seed producing plants gradually evolved into trees with seeds vast forests. One of the first kinds of large trees was Archaeopteris    This was a fern but resembled modern conifers.   It had woody strength built in rings to support weight and height, protective bark, and extra wood at the base of the branch to prevent breakage.   They made up 90% of the forests during the late Devonian which accelerated the increase of oxygen They were also the first long lived perennial plants 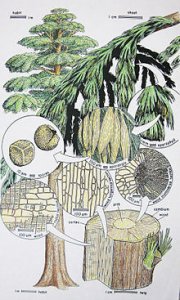 Over time, measured in 100s of million years, other plants developed tree like forms.    Unlike the human evolution that is traced back to a single African ancestor, there is no one mother tree from which all trees developed.

Let’s look at the development of oaks.   The following has been taken from the Genetic Literacy Project

Over the course of some 56 million years, oaks evolved from a single undifferentiated population into the roughly 435 species found today on five continents, but not Africa Australia and Antartica.

For decades scientists could only speculate about much of the evolutionary history of oaks because of gaps in their fossil record and limitations of DNA. But recent advances in genome sequencing and analysis have allowed a detailed picture of the origin, diversification and dispersal of oaks. It is a remarkable evolutionary success story.

This diagram shows the evolution from the “Mother” Genus Quercus into 2 subgenera Cerris and Quercus, and then into 8  Sections.   The 435 Species are shared between the 8 Sections. 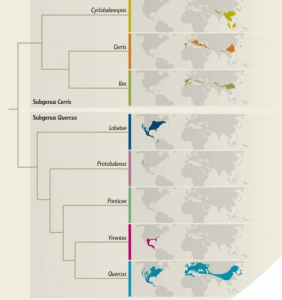 The distribution of oaks across the world is patchy, in part due to their need for certain soil and climatic conditions.   However, while the oaks were evolving, the original supercontinent split up and tectonic plates drifted apart isolating populations of plants and animals that developed differently.

Now we are faced with the possible extinction of 30% of the world’s trees.  The State of the World’s Trees report said that the clearance for farming – both crops and livestock – and logging, are by far the biggest threats to trees, but added that climate change was also “having a clearly measurable impact”.

The study looked at the risks to 58,497 tree species worldwide and found that 30% (17,500) are threatened with extinction, with a further 7% listed as “possibly threatened”.      Some of the threatened tree species have always been fairly limited in numbers and distribution.    The report identifies trees at particular risk of extinction: 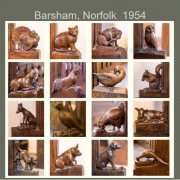 At our 16th Nov 2019 meeting Richard gave a talk and slide presentation about Church Carvings and how they originated. Information about creatures from faraway lands was passed on by travellers in the form of verbal descriptions sometimes enhanced by a sketch.
Monks compiled these drawings into books known as bestiaries, which illustrated strange creatures both real and imaginary, but nearly all inaccurate.
Carvers used this information for their work in churches and cathedrals, as well as biblical scenes and moral stories often based on village life. Heraldry was also frequently commissioned by the wealthy patrons of the church.
Many pictures of their work in the form of gargoyles, grotesques, misericords, bench-ends and arm-rests were shown, as well as a few of his own carvings in the same tradition. 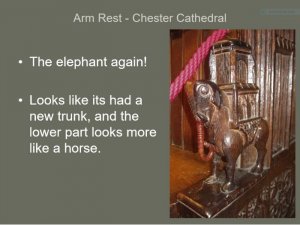 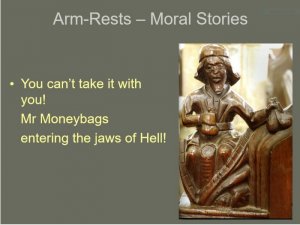 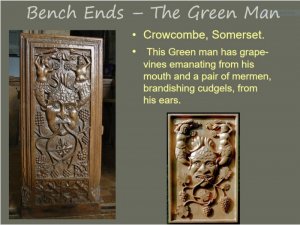 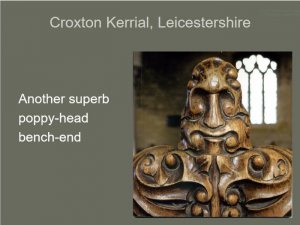 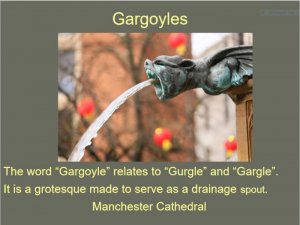 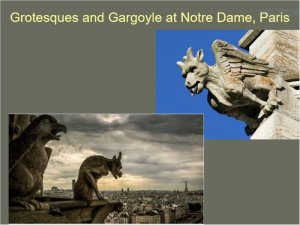 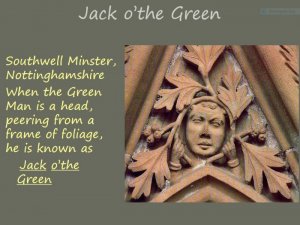 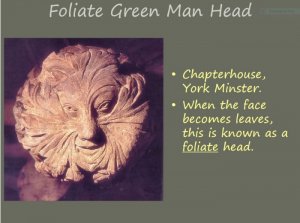 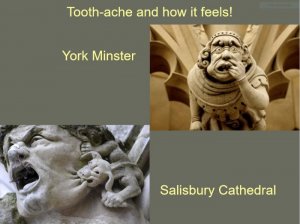 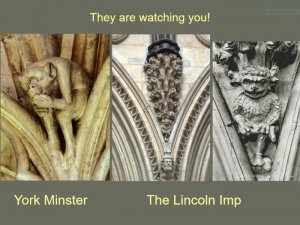 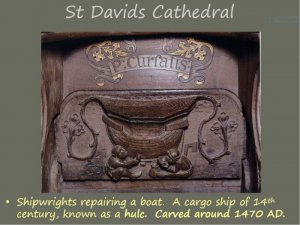 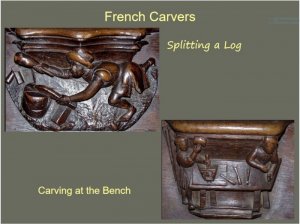 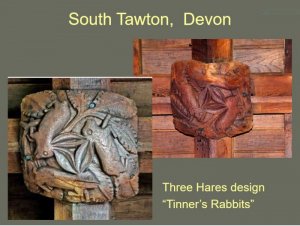 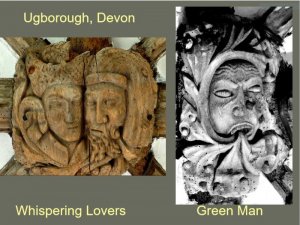