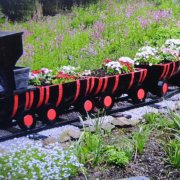 Thanks to Gill Smith for this report

Keith spoke of many aspects of his life including his time with the General Post Office and Telecom when he was responsible for the buying of large pine trunks which would be used for telegraph posts. At first they came from Russia and quality control was done in this country. Many were rejected so a decision was made to send him to the source to avoid the cost of transporting spoilt trunks. This meant many trips to Finland. Even after that there was a long process of drying out and preserving the poles before they were fit for purpose.

In his spare time Keith likes to write poetry and he closed his talk by reciting the poem Three Ha’pence a Foot. The poem tells of an argument between Noah wanting to buy wood for his Ark from Sam Oswaldthwaite a timber merchant from Bury.  Click to see The lyrics and Stanley Holloway’s recitation 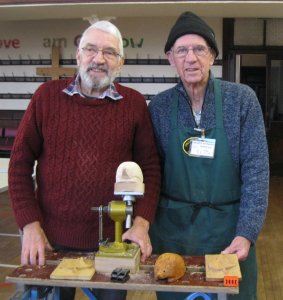 Norman and Keith (in a hat)

Norman has always been creative and has a great deal of experience working with wood doing woodturning and woodcraft. He showed us many of his small projects, most of which he uses for fundraising,  One larger project was producing a train out of Whisky barrels. The train is now being used as a flower display on the very large roundabout in Rawtenstall opposite the library. 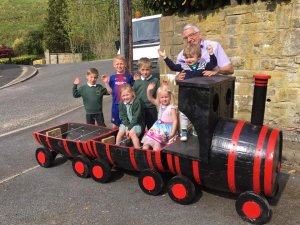