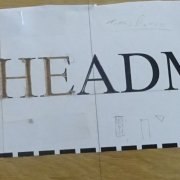 John Adamson, a club member,  has been working on a commissioned plaque in Oak with the words “A ROLL OF HEADMISTRESSES” on it. We were grateful to him for giving us a a demonstration while he worked. John thinks letter carving is the hardest because if it is wrong everyone will know.

He prints his words out on a computer, checking that it looks right – such as, do some of the letters look too far apart. If the pages are joined together, is the bottom line absolutely straight.  (John paid for his to be printed on an A3 sheet). He talked us through the process of glueing the paper to the wood, He says Spray Mount is best, but expensive.

It is good to have the right size chisel – sharp, flat for straight lines and a slightly curved gouge with rounded corners for curves.

The first cut he showed was a stop cut down the centre of a straight letter – it does not have to be deep. He likes Roman Times Font because of the serifs at the end of each line. 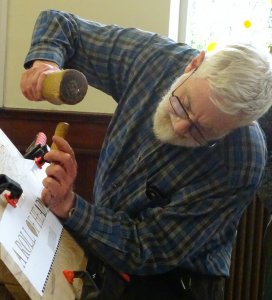 He uses a sharp knife similar to chip carving to do the serifs. If 2 serifs were touching, he shortened them to leave a slight gap. With the stop cut down the centre he made a 45 degree cut from both sides of the letter to complete the V cut shape.

He then demonstrated the same principle on a curved letter using the shallow gouge. Curved letters were more difficult – the word ‘mistresses’ with 4 S would be a challenge!

Club members appreciated that John shared his work and answered so many questions.

John has a website with many of his carvings to view. Here are two links to his letter carvings:

Bob Burton, a club member works with wood for a living.  Bob is experienced in many areas: restoration, cabinet making, carving and sculpture.

He shared with us how he was working on his latest commission ‘The Carving of a Lady’s Head’. 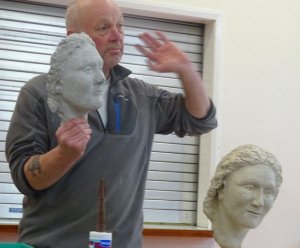 He brought with him a life size model in plasticine and the various moulds he had made of it in preparation for the final carving in wood.

To start with he had taken photographs of the lady, especially full face and side profiles.0 He cut out a negative profile in cardboard to aid his carving.

Bob used  plasticine similar to the one found on this website  http://www.newclay.co.uk/?page_id=1455 He paid about £1.75 for 500g for white but shop around because it can be 3 times as much as that. Bob prefers to use white because it is best for showing the shadows. He used other materials like crushed paper to provide inner packing to help him use less plasticine. (the plasticine can be re-used at a later date for another project.) This plasticine model could be used to help him with his carving but he wanted a more permanent model.

So, once he and the sitter were happy with the model he prepared a mask using a basic silicone tube from Wilko costing £1. He covered the face with it and when it was dry he peeled it off the model.

This mask would be too floppy for the next stage so he made another mould using builders’ foam filler. This one holds its shape better.

Then, using the foam mask as a support, he placed the silicone mask inside it and then filled it with cement or plaster. When set he removed both of the masks to reveal a permanent exact copy of the lady’s face. Bob would use this to aid his final carving in stone or oak or lime.

He then discussed the problem of where to source a large enough piece of wood and the problems of glueing 3 or 4 pieces together. Also what would be the size of the finished carving? It seems that one shouldn’t make a bust carving the exact size of the sitter but make it larger or smaller.

We look forward to seeing the finished work.

Finally, Bob showed us various other models and moulds that he had made. 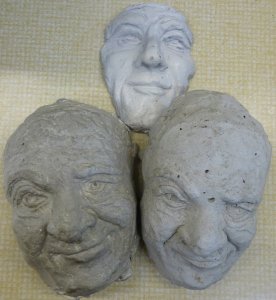