John’s work has been described as ODD, PECULIAR and QUIRKY, from admirers of his carving.

John has been producing various styles of sculpture for 60 years, since the age of 8 or 9. Having been surrounded by tools and wood in his pattern maker’s father’s workshop, but not allowed to touch. He made his own tools fashioned out of worn down clog iron heels made into knives.
Preferring to work with “found” wood, rotten wood and odd shaped cut off logs, he then branched out from that point.
As a child/teenager the book which he consulted was “Whittling and Woodcarving” from his local library and his first production was a leaf. Also as a teenager he learned to view what he wanted to “see’ from slide shows. Always carrying his sketch book and pencil he watched people on public transport and portrayed them for later use. Even now he always carries his sketch book and a Flexcut 6 Tool Carving Jack for drawing or whittling whenever he has a free moment.
Whilst attending a woodworking group he started with woodworking tools to produce an Otter. He enjoyed this style of work and wanted to advance further by joining a sculpture class where his unusual approach to sculpture was developed. He worked in different mediums such as wood, clay and aluminium producing abstract designs.
A discarded circular pub table top offered a beautiful wall plaque to show a furrowed field in a landscape with trees then stretching out to the horizon.

As a mature student in his mid-fifties John attended university at which time he went on a 6 month exchange student programmein America. He found most woodcarving surrounded the theme of Christmas with decorations for trees and Father Christmas designs.

Using plaster moulds he sculpted faces and put different expressions on them during carving. 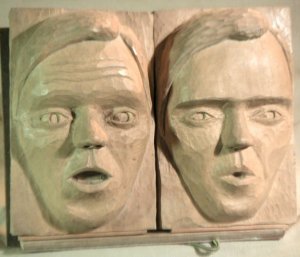 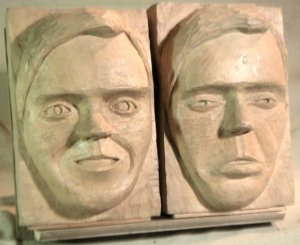 From finding wood he used the branches to provide inspiration for the designs. From laying a parquet floor there were several small square pieces left over, which he referred to his sketch book and produced a mosaic of heads which he fashioned together in a grid pattern.

As he got more adventurous he bought a chainsaw, attended a training course at Myerscough College and started to gain experience in tree sculpture, which many of his designs are still present.

The Globe Theatre approached the British Woodcarvers Association of whom John was a member and asked for a medieval group of people dancing. 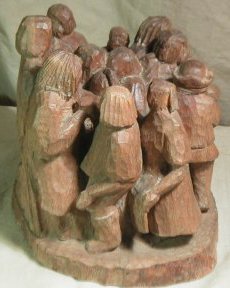 John found a rotten piece of wood with a hole in the middle and produced a ring of dancers holding hands. He called it The Grand Chain. 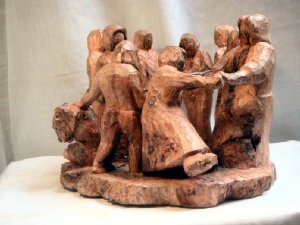 He does not use glass paper to finish any carvings preferring a rustic appearance.

By this time John was not working and so developed a website and started to advertise his tree sculpture work which has proven to be productive.

In his mature years he has decided to scale down his work from 12 feet high tree sculptures for risk of injury and now talks and demonstrates his art.

Whilst staying in Orkney last year he attended a stonemason carving course, which has given him his enthusiasm for lettering. 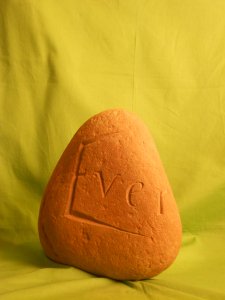 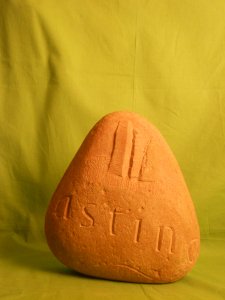 So after more than 60 years The Sculpture’s Progress continues. See the websites below for further information.
http://www.jawoodsculptor.co.uk/

Carving Picnic Tables in Padiham in 2012