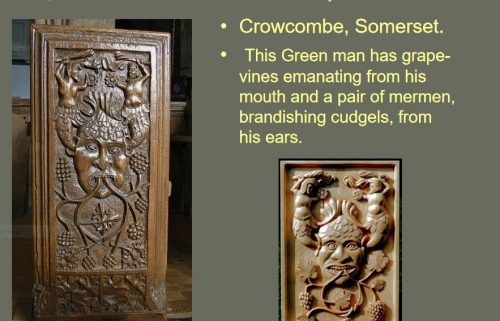 At our 16th Nov meeting Richard gave a talk and slide presentation about
Church Carvings and how they originated. Information about creatures from
faraway lands was passed on by travellers in the form of verbal descriptions
sometimes enhanced by a sketch.
Monks compiled these drawings into books known as bestiaries, which
illustrated strange creatures both real and imaginary, but nearly all inaccurate.
Carvers used this information for their work in churches and cathedrals, as
well as biblical scenes and moral stories often based on village life. Heraldry
was also frequently commissioned by the wealthy patrons of the church.
Many pictures of their work in the form of gargoyles, grotesques,
misericords, bench-ends and arm-rests were shown, as well as a few of his
own carvings in the same tradition.
https://landcwoodcarvers.co.uk/wp-content/uploads/2019/11/Capture.jpg 377 500 Phil Palmer https://landcwoodcarvers.co.uk/wp-content/uploads/2018/05/L-and-C-Logo-290x300.jpg Phil Palmer2019-11-27 21:22:132020-08-06 12:06:31Church Carvings, a talk by Richard Colbran
0 replies