I saw some of David Nash’s work on tv the other day, and thought I would share my memories.

Back in the late 90s, I was a “rather older than the rest of the year” sculpture student as the University of Central Lancashire in Preston.     There was a request for students to provide free labour to set up an exhibition by David Nash in Gawthorpe Hall, Padiham, Burnley.    Back then I could not look him up on Google, and I did not have the time to go to the library before joining the group at Gawthorpe Hall, so did not realising the size if David’s work.     I turned up in sandals when everyone else was in walking boots to protect their toes.   I had to answer to Sandals for that day and weeks after, back in the studio.     My impression was that the work was very BIG and DIRTY.     The burnt items came wrapped in clingfilm and we got covered in charcoal as soon as we took this off.      The work came on a lorry adapted to carry slate.     The front was an articulated lorry and the back was from an ordinary wagon to give greater pulling power, a strong frame and less difficulty negotiating tricky bends.

If you know my work, you will see why I am attracted to David’s.        This abstract art rather than representational, and on a large scale.     I rather doubt that there is any glass paper used in the finishing of his work.   It is about the shape rather than the detail or the finish.   Here are some images of his work. 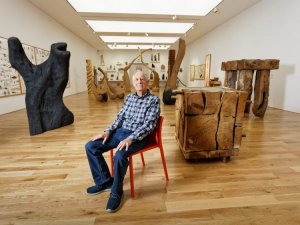 This is very much as I remember David Nash and his work, but it is not at Gawthorpe Hall 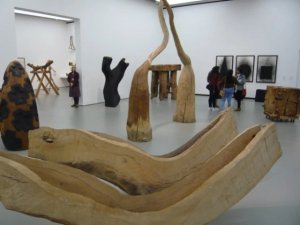 Again, this is very much as I remember David Nash’s work, but it is not at Gawthorpe Hall 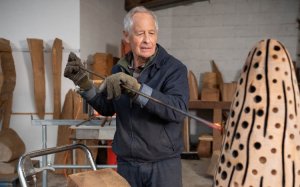 This looks a bit brutal 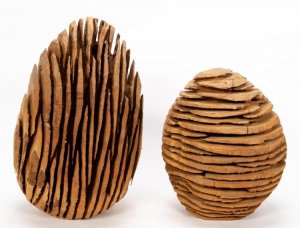 I am not sure about the size of these, but assume that they are chainsaw carved 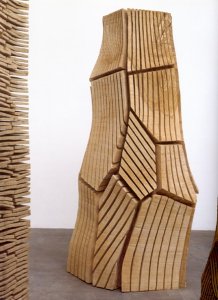 I like the way that with simple cuts David finds interesting surfaces and shapes.    His childhood holidays were spent at Blaenau Ffestiniog , where later David helped clear and replant a nearby forest that his father owned.  He also worked for the Commercial Forestry Group and learned about wood of many kinds and that he hated planting trees in rows.   It must help to have that experience and access to lots of Big chunks of wood.

The Wall in the Wilderness – Tasmania
Scroll to top