Richard says – The photo was taken in Spring, with the sunshine and moving cloud shadows making kaleidoscopic patterns across the multi-coloured layers of rock.  Snow showers came rattling in providing further variations.  My son was perched near the edge of the Southern Rim with his camera.  Certainly a day to remember on a wonderful family holiday!

Would it be possible to make a relief carving of the scene that would do it justice?  Perhaps not, but I decided to give it a try!

A piece of lime was required, about 300 x 350 X 35 mm thick.  A board was found which could be jointed, with grain running horizontally, but one end was slightly spalted and streaky. It was decided to leave that in the sky area, and how well that turned out in the finished product! 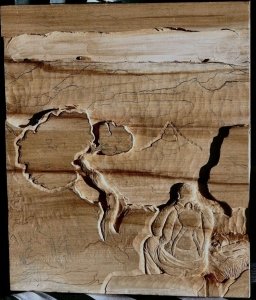 The picture was scaled and transferred to the wood.  Outlines were defined and depth layers were cut. Notice the streakiness and shade variation in the sky area on top right.

Trees and foreground figure were rounded 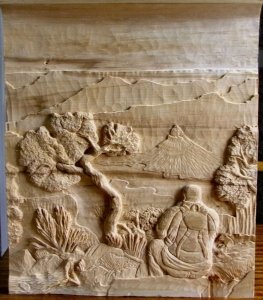 Some staining was done to test the general effect.  Spirit-based wood dyes were used, and knife cuts were made at the layer boundaries to prevent bleeding of the stain. 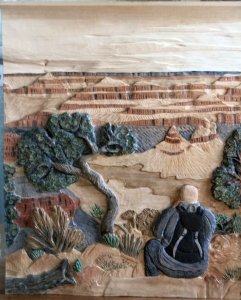 It was found that the picture did not reveal the depth of the canyon, but looked more like a winding stream, so layers were re-adjusted, and some further detail carving was done, which, after further staining, gave a much better impression of the depth of the gorge. 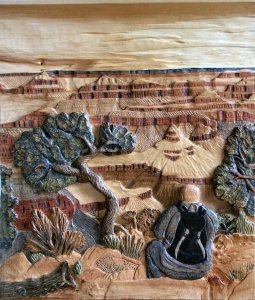 The carving was sealed, then set in a mahogany frame and presented to the sitter.

Holiday in Stathpeffer
Scroll to top