Wood carving is one of the oldest arts of humankind.    Unfortunately, wood does not survive well in the archeology context, so all examples are later than cave painting, and bone and stone carving.   I argue that wood carving was a easier and earlier technology than painting.    The earliest painters needed to learn new skills, find sources for their pigments from stones and muds, dry and grind them to a powder, and then find a way of making them stick to rock.   Woodcarvers had it easy.    The earliest woodcarvers already had the tools and the skill to make bows and arrows ect, so were shaping wood.  They only had to find a piece of wood that looked almost like something and alter the shape a small amount.    Probably working in 3D came easier to them than 2D.    Our education system concentrates on 2D workTo the exclusion of 3D work . 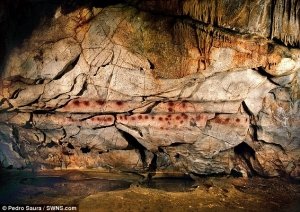 The oldest cave painting known until now is a 40,800-year-old red disk from El Castillo, in northern Spain.  The world’s oldest stone tools  were unearthed from the shores of Lake Turkana in Kenya, and date to 3.3 million years ago.     If my argument is valid then  oldest woodcarving would be some time between 3.3 million and 40,800 years ago. 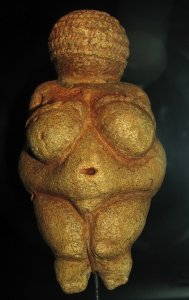 The oldest stone carving, the Wilendorf Venus stands 4.5 inches high  carved from an oolitic limestone that is not local to the area, and tinted with red ochre.    The figure is believed to have been carved during the European Upper Paleolithic or “Old Stone Age”, a period of prehistory starting around 30,000 BCE. 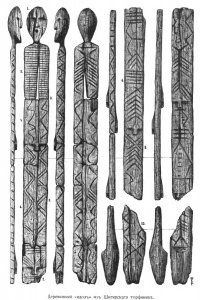 The world’s oldest wood carving, the Shigir Idol, a totemic sculpture that stands 2.8 meters (~9.2 feet) tall, was made 11,000 years ago, making it twice as old as the ancient Egyptian pyramids at Giza.    The idol was discovered in a peat bog in the Ural Mountains in 1890

The  idol dates to the very beginning of the Holocene epoch, or the geologic period that marks the development of human civilization. Researchers also determined that the sculpture was made from a larch tree that was, at the time, at least 157 years old.

The Carving of Coral Reef By Mark Doolittle