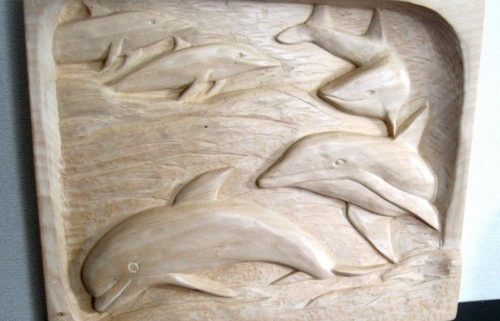 Jill says  “In 2003 I glued together some pictures from a “Dolphin Calendar” to
make up a scene for a carving. I drew the outline on a piece of limewood
11.5 inches by 9 inches 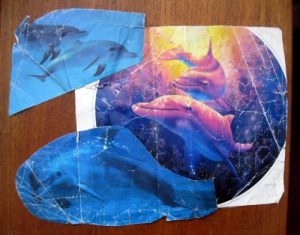 My teacher at the time, Vic Bentley, said it would be too difficult
for me to carve the part where the dolphin at the back appeared to be
moving forward out of the picture. I even made a plasticine model of
what I thought the final carving would be.  I then put it aside to do
other projects.  Years later, I picked it up again  and finally called
it finished 18 years later!
Other members suggested I should paint the carving. I was very tempted
but after 18 years I decided not to risk ruining it with poor painting.
Instead, I gave it several coats of Beeswax polish”
https://landcwoodcarvers.co.uk/wp-content/uploads/2020/06/GS-Dolphins-2.jpg 400 500 john https://landcwoodcarvers.co.uk/wp-content/uploads/2018/05/L-and-C-Logo-290x300.jpg john2020-06-25 08:05:062020-06-25 08:05:06Jillian Smith – Dolphins
0 replies

A View from the Galleries – CARVING THE AUSTRIAN BY NORMAN JACKSON

CARVING THE WALTZERS BY JOHN ADAMSON
Scroll to top