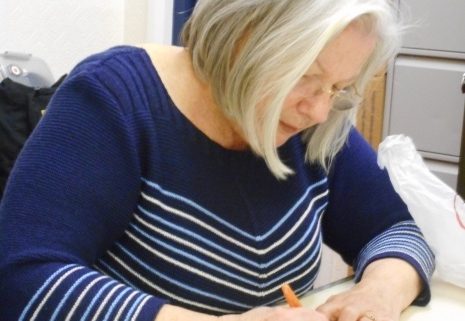 Back in October 18, Adrian and Martin gave us a thorough insight into marquetry and even provided tools and veneer for us to have a go.    They have a different approach to the craft. Martin started with a kit as an eight year old.  In the kits there are all the veneers needed, plus a baseboard, a knife and glue and a pattern to follow.   The first piece of veneer is cut to size at the top, but slightly oversize at the bottom and glued to the base board.   The next piece is cut in the same way.   The second piece is placed over the first and the first piece so that the second piece fits snuggly, then that too is glued down.   Further pieces are cut and fitted in the same way, always working down from the  top to the bottom of the baseboard.  There is considerable skill in cutting the veneer accurately.

Adrian learnt his technique at Leeds Marquetry Group   The patterns, veneers, glue, and tools are the same, but the method of cutting is different.  Each piece is cut to size but the cut is at an angle of about 10 degrees from vertical, so that it fits in to other pieces like a dovetail.  The work is only glued to a board after it has been completed and the  Leeds group test work before it is put on the board by holding it to the light to see if there is any light showing between the pieces Adrian with. a part finish piece Adrian’s work with the original image Martin’s birds to be incorporated into a larger work My first attempt at marquetry using Martin’s technique. I did break one side of the A