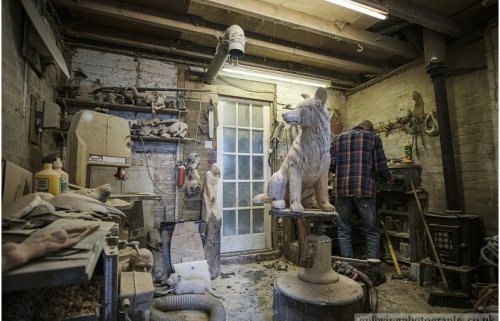 Mick Illsley has recently been to Arran on holiday and met Marvin Elliot in his workshop.  The members who managed to Zoom on Thursday 29th July, heard all about it,   The offer of free chisels and the handing over of a large lump of lime on the promise that Mick will send him a picture of what he carved from it.

“Our Arran Artist for this month is Marvin Elliott. Marvin’s wood carvings and sculptures are a familiar sight around Arran (think of the Corrie seal!), and are also to be seen much further afield these days. The Voice caught up with Marvin in his well-known workshop in Corrie.

Marvin trained as a Land Surveyor in the Army and continued to work in that role after leaving the military. He was surveying for a pipeline in Iran when he had a stroke that left his left arm weakened. He moved to Orkney “as a hippy drop-out”, and one day noticed a woodcarving competition in a magazine he was idly leafing through. He entered and much to his surprise he won. A church in England saw his winning entry and commissioned him to carve a Madonna and Child for them in 1980. His first thought was “I can’t do that!” but he had a go and the remarkable result can be seen in the photograph below. This led to several more Church commissions, and before long his work was in demand all over Britain.

After ten years on Orkney Marvin was commissioned to make a series of animal sculptures for Arran Aromatics, just then opening in Brodick. Coming to Arran to work on the project, he found that he very much liked it here and has been here ever since.

Marvin says that the process is all important in the making of these works. The outward appearance, seemingly so spontaneous, is often, paradoxically, the end result of a long and laborious process and emerges over time from the natural form of the wood.

These days three-quarters of Marvin’s work is commissioned, and he has an order book that is pretty full for the next six months. He also has smaller pieces for sale in his workshop that are popular with visitors and tourists.” 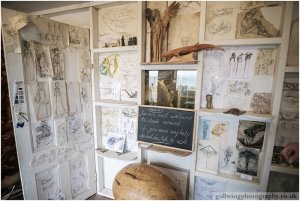 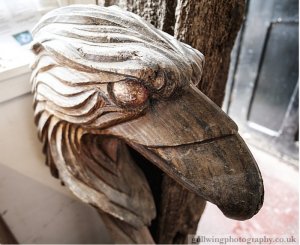 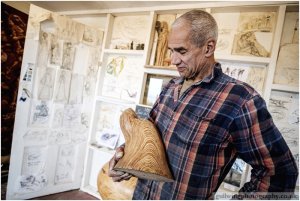 Marvin Elliot with some work 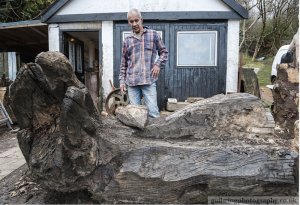 Marvin Elliot with some Bog Oak 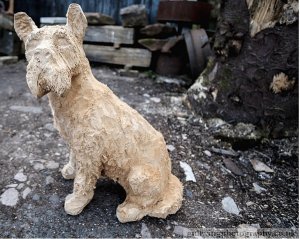 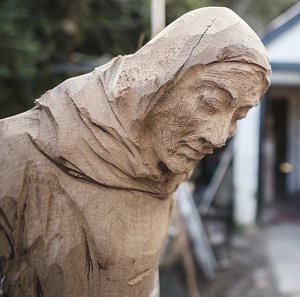