This nature trail was instigated by a Park Ranger about seven years ago, in collaboration with the Friends of Towneley Park. It provides an easy walk of about three quarters of a mile, on good paths, starting opposite Riverside Car Park entrance.

There are ten marker posts around the trail, each capped with a carving representing a natural creature which might be seen nearby, namely speckled wood butterfly, heron, fox, frog, swallow, toadstool, rabbit, wren, dragonfly and hedgehog. The carvings were done by members of Lancashire and Cheshire Wood Carvers, but inevitably the weather has taken its toll, and some rot has set in.

During last summer, remedial work was started, involving three members from both groups.  Two carvings which were beyond repair (one having been vandalised by a woodpecker!) have been replaced and re-sited away from overhanging trees, to help the wood to dry out more quickly. The other carvings have been patched up, with some re-carving and use of filler. More new carvings are under way to replace any further write-offs.

One outstanding feature on this trail is the flowering of the Southern Marsh Orchids in late May or early June, and this is said?to be the most northerly habitat for this plant. Riverside Car Park has picnic areas, toilets and a refreshment kiosk, as well as a children’s play area to enjoy on your return.

There maintenance of these carvings is on going in 2021 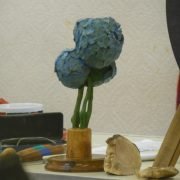 The hydrangeas were an unusual form of John’s normal way of carving using Found wood. Found wood, he defines as ‘not machined”, as Bought is an opposite of Found, and all Bought would is machined.   With various examples, he showed the advantages of found wood.   It is far less boring than square bought wood, and has the strength that the growing tree builds into the wood, so there is less problems with short grain etc.  He takes penknife were ever he is and carries a 6 tooled Flexicut knife set on holidays.