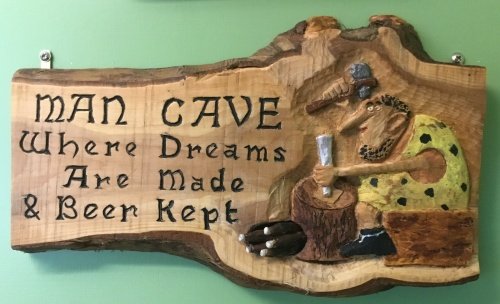 Stuart Hood kindly sent in pictures of two carvings he has done during the lockdown.

He had been toying with the idea for a sign to go on my workshop door and came up with this.  There was a knot hole in the piece of wood, it’s yew by the way, so after wondering whether to fill it in or not, he came up with the idea to fill it with beer bottles. After putting on dainish oil it looked a bit dull so decided to paint it. It’s the first time he had  ever painted a carving.

Stuart wrote that he was not sure what the wood is, he picked it up from Hollingworth lake at a woodland weekend when they were planking some logs. he saw this carving in a book at the club some time ago, and seeing as hisy surname is Hood and is a direct descendent, he thought he would have a go. I have asked if he is related to the Last of the Summer Wine character, Billy Hardcastle, who also claimed to be a direct descendant of Robin Hood. I have not got a reply, but do not expect much of a revelation as both Robin Hood and Billy Hardcastle are fictional, or so I am lead to believe