Blog - Latest News
You are here: Home1 / Uncategorized2 / Murray Taylor visited the club on Thursday 18th July and talked about ... 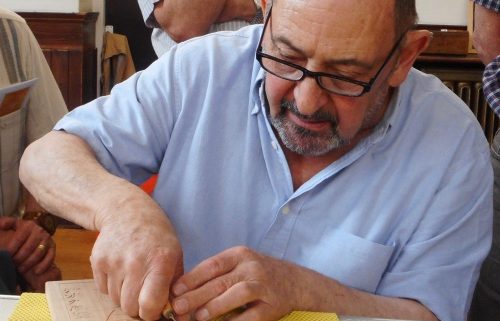 Murray was aware that many of our members consider chip carving to be boring, and set out to prove that it was not just a pattern of triangles; it can do lots of interesting designs, lettering, and pictorial work.

All the equipment needed is:-a Pfeil chip  carving knife, a stabbing knife (don’t be worried – the blade is only 1?inch long), an ordinary ruler preferably with black markings on a white background, a T square, a mechanical pencil with 2B leads, a bow compass, a sharpening stone, a  strop, and wood.   Murray mainly uses Lime wood from the original Hobbies  shop https://www.alwayshobbies.com .   Murray showed us his way of chip carving.   Accurate marking out is most important and he has designed a tool that  marks 4mm dots from which a grid can easily be produced.   A pyramid of 4mm is easier on the wrist than 5mm!!  He showed us taking out the standard triangular pyramids.  He has very strong arms and wrists from a life time as a manufacturing jeweller, but he showed us a way to apply extra pressure should we need it. This is Murray’s travelling work bench. The holes can be used to trap the work 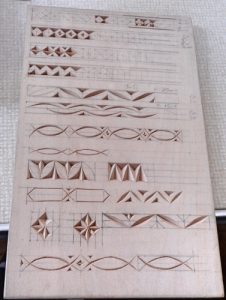