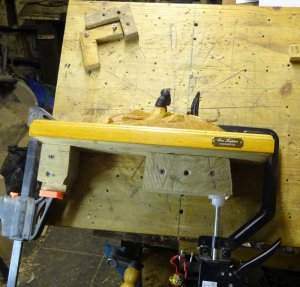 I found some scrap wood to pack out the space between the horse and the back board, and hold the horse in position. 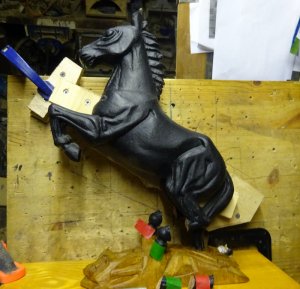 There theoretically 8 different ways I could try fitting the first of the broken leg pieces ( I will leave it to you to work out the 8 ways).   Having done it once, I colour coded the legs and appropriate broken bits, so I did not have to do it again.    Remembering Nick Pantelides talks about joining the head of a walking stick to the stick using a threaded rod to strength the joint, I hunted round my “Will come in useful one of these days” box and found 2 bolts of a suitable size.   I drilled into the broken bits, the legs attached to the horse and the legs attached to the base.   Although I tried to get all the holes in line, they were a smidgen off, and had to be ground out to allow all three bits of the leg to be inline and meet correctly. 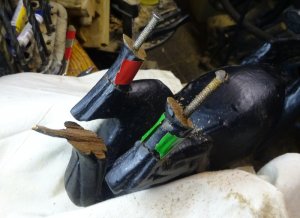 Again remembering Nick’s talks, I knew that I had to get special glue for the job and a provide an escape route for the expanding glue.   Richard Colbran had mentioned using the method in his report on  his Fence Post carvings, and as I was not sure of the details of the process, I asked his advice. 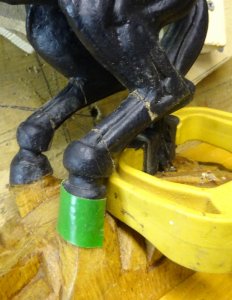 I took all my courage in my hands, and mixed and applied the glue, to both ends of the rods, and the tail, and clamped it all together.   The only clamp I could apply was to the tail, as the legs had no parallel surfaces.    So I had the 4 leg joints to hold and squeeze the legs together for the 5 minutes before the glue sets.   That’s not easy with only 2 hands.     When I was able to look closely at the legs joints, they were a bit out of line, less than a 16th of an inch but noticeable.   With the owners consent, I smoothed over the problem joints, and filled in parts of the tail.    As you can see from the picture above the paint round the joins had split off when it was broken.   As there was no way I could match the faded black paint, I rubbed down all the horse, touched in some of the bare patches, before repainting all the horse. 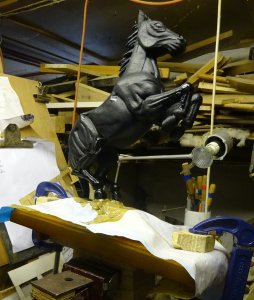 I am not a good painter, and all my doors have paint runs marring the surface, so I approached the painting task with some trepidation.      As preparation, I have been told, is the most important element, I covered the base with lots of plastic to prevent drips and splashes. 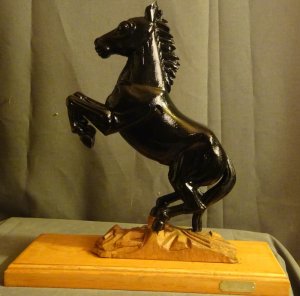 The final result!!     Looks ok even with a close up of the legs 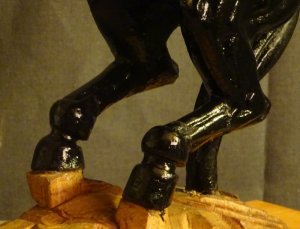