My last post was about the repair of a carved horse made by Jim Lupton.    I had been brought to me by his granddaughter who shared some pictures of his work.     I have never met Jim, but his work shows that he is the sort of carver I would have liked to meet.   Here are the pictures and his granddaughter’s memories of Jim Lupton 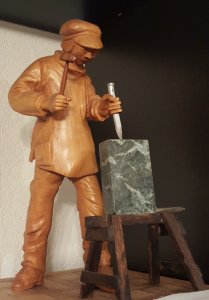 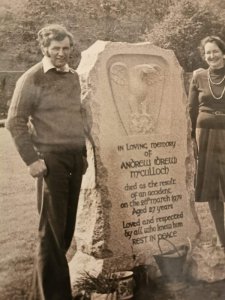 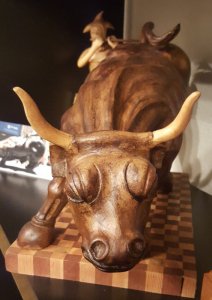 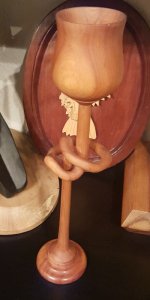 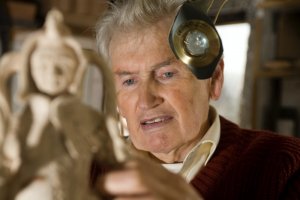 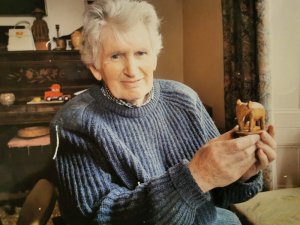 Jim with the elephant he carved aged 9 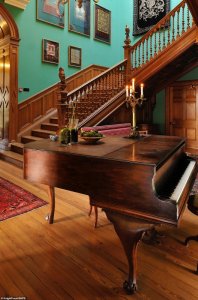 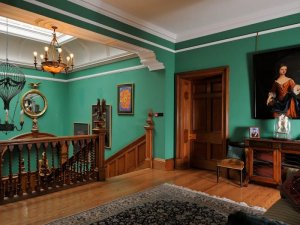 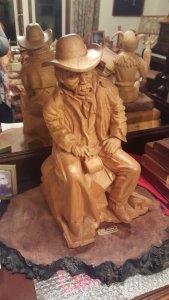 Jim Lupton was born and lived his whole life in a little village called Creetown in Dumfries and Galloway, Scotland. His very first woodcarving was of a baby elephant which Jim whittled using a penknife at the age of 9 However it would be many years before this skill would turn Jim into the artist he became.
He began his career as an apprentice stonemason at Milligan’s Monumental Masons, Carsluith after missing out on the joiner’s apprenticeship he was hoping for. Unfortunately  after some time Milligan’s could no longer afford to employ Jim, so he sought employment in the local village quarry, a Granite Quarry on the Fell Hill, Creetown. It was here he learnt about the structure and properties of stone. From the quarry he went on to hone his career as a monumental stonemason at McKenzie’s Monumental Masons, Newton Stewart.
Jim made many headstones and memorials over the years, including a war memorial that sits in Fossvogur in Reykjavik, a headstone for the founder of Logan Air, Willie Logan and a stone marking the Queen’s Way, which was unveiled by Princess Anne to mark the Queen’s Silver Jubilee In 1977. McKenzie’s were asked to create a headstone with an eagle carved out of local granite. There was only one man in their yard who they could entrust with such a challenging task, Jim. The headstone has an eagle’s head and wings projecting from the large granite boulder and is situated in Anworth Cemetery near Gatehouse of Fleet. It was carving this eagle out of granite, that would become the catalyst in developing Jim’s woodcarving hobby in later years.
Once Jim ended his career in the granite industry, he took on the role of school bus driver and janitor at the local primary. It was here he had the opportunity to pass his musical knowledge onto the local children through teaching instrumental brass; a passion he developed during his National Service with the KOSB. He even took a small group of children to appear on BBC Radio Scotland. However, Jim missed having something tangible to show for his days work. His wife Janette and his 4 children decided to club together to buy him set of woodcarving chisels and from there he never looked back. All Jim’s spare time was spent in his wood carving shed in the back garden, he started carving in 2D, a skill he had mastered as a stonemason, but he soon progressed to 3D carvings, “carving in the round” as he liked to call it. Jim loved to challenge himself and tried many different ideas, some that paid off and some that never saw the light of day. Inspiration came from many sources including suggestions from family members, characters from both history and folklore as well as from travelling with his family.
Jim was a humble character never looking for the limelight, but in 1987 he appeared on a Border television programme that looked at local people and their hobbies. He was also featured in an edition of Dumfries & Galloway life magazine, which showcased a selection of his carvings.
In 1996 Jim purchased a lathe and began woodturning. He produced bowls, lamp stands, …. and even a finial that adorns the roof of his daughter’s house. But carving was where his true passion remained and like all good artists, he was continued developing his skills and honing his craft. He amassed a huge collection of carvings before his sad passing in 2011, the most of which remain with the family today. Jim wasn’t on keen commission pieces because he could never guarantee a piece of would evolve into the vision he had. However, a couple of commissions which he did take on, and was proud of, were the carved door for the Creetown Clock Tower and the staircase finials for Penninghame House, Newton Stewart. Both commissions are still in situ today.

He was a true artist with an eye for perfection and detail.