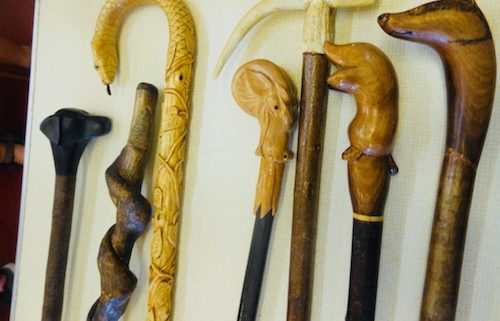 Nick laid out his main criterion for a walking stick – It must be comfortable.  This is at variance with the British Stickmakers Guild (www.thebsg,org,uk) which marks sticks down if they are not billiard cue straight, amongst it’s other petty rules.

Sticks are traditionally made from hawthorn, ash, holly, hazel although interesting sticks can be made from the centre of a Brussel sprout stem.   The wood should be cut January or February before the New Years growth has started, but it is commonly agreed that 5 minutes before someone else cuts is is also a good time.   The size should be about 1 inch diameter as this fits nicely into the hand.   Nick prefers leaving the bark on the wood although there are those who always take it off.

Nick may not be favour absolutely straight sticks, but he has come up with a simple way of doing it.  All previous speaker we have had on this subject have described long metal tubes filled with wet sand and the sticks, being heated from the outside to straighten stick.  Nick uses a hair dryer and a bit of plastic that started life as a rain water ware for straighten, relying on the water that is already in the wood as he does the straightening soon after cutting the stick from the wild.

The heads are fixed to the sticks with 6 inches of 1/4 inch screw bar and Araldite two part glue.  Heads should be comfortable in the hand and Nick has found that some of the designs shown in magazines are just too big, so beware.  A short head as in the Photos above, avoids the possibility of the neck breaking  on the short grain.  The sticks are finished with several coats of Danish Oil Repair of Horse Carving by John Adamson
Scroll to top